World Domination Summit 2013 - Where Everyone Remembered to Be Superman

A wide, one-way street runs between Arlene Schnitzer Concert Hall and the Portland Center for the Performing Arts. On a Sunday in early July, it fills with sunlight.

Nate, Jon, and I had skipped the morning sessions to wait in a long snake of a line outside of Voodoo Doughnuts, and I'd spent the remaining forty-five minutes before the lunch break trying not to eavesdrop on a conversation about technology, theology, and business that Chris Brogan was having with some friends.

When I walked outside on Southwest Broad, which was blocked off for WDS, I saw something unusual. Keep in mind that unusual sights become usual at the World Domination Summit 2013. But I couldn't help but stare as a man with a shaved head and bushy eyebrows bound together the feet of a younger man in a wheelchair. This scene, which later became an experience and not simply another snapshot or postcard, caused an eddy in the flow of foot traffic.

Benedict, the one in the wheelchair, was pensive. He watched Slade work, and for his part, Slade finished with the string with quiet confidence, as though he were in the regular habit of tying up strangers.

They were strangers, I learned later, and that was significant, considering what happened next.

After spreading a towel on the sidewalk, Slade helped to situate Benedict on the knee-high wall that divides the sidewalk. He then lay down on his back.

Now people were beginning to notice. The polite conversation between Darren Rowse and a WDS attendee to my right tapered off because both men turned their attention to the strange scene, unfolding at a busy intersection in downtown Portland, Oregon.

With the help of Slade's partner, Sky, Benedict tipped forward and locked hands with Slade. Slade planted the arches of his feet on either side of Benedict's pelvis and pushed up, suspending him in the air. If you every played Superman as a child with a sibling or friend, then you'll have no difficulty imagining the scene. Your two torsos were parallel, and the other person's legs supported your weight. But when was the last time you witnessed two grown men, still strangers perhaps fifteen minutes before, play Superman?

The child's game becomes uncomfortably intimate. Perhaps twenty, two dozen, of us stopped in our tracks, speechless, wondering what would happen next.

I have done yoga only once, but I can still attest that those of us with four working limbs take for granted a position as basic as Downward-Facing Dog. We stretch. We sweat. We try to maintain composure.

Put yourself in the place of a man who cannot control his legs, a man whose hands don't always behave. In those first few moments, I watch Benedict. Though his hair fell in a half-curtain across his reddening face, I could read a trace of panic. Here was a picture of total dependency, of raw vulnerability.

Slade spoke quiet, comforting words, and a change began. With stunning strength and dexterity, he moved Benedict through various positions, all the while holding him aloft.

I don't think I was the only one who felt a certain calmness emanate from the two men. Witnessing intimacy and healing snatches the words from our mouths and induces awe. I found myself thanking God for the sweetness of the moment, for Slade's skill and audacity, for Benedict's humility and courage.

Slade and Sky call this style of yoga "flying." This is in keeping with the other type of instruction that they do—skydiving. The young woman who had flown before Benedict watched and wept, her cheeks shining with tears.

Soon enough, the flying came to an end, and Slade lowered Benedict to the ground. He hopped to his feet, gathered Benedict in his arms, and put him back in the wheelchair.

Now Benedict too had tears streaming down his face. I couldn't hear what he said to Slade, which is as it should be. But I saw a face aglow with gratitude and peace. Benedict had the word "JOY" tattooed on his neck. He and I never even spoke, but I would still consider him to be one of the bravest people I have ever encountered.

Over the last week, friends and family have asked, "How was Portland?" A concise answer hasn't yet come to me.

I met Chris Lema, who leads a team of software developers and is building a support system for entrepreneurs; and Brenda Muir, who plans to compose more beautiful eulogies; and Dan Byler, who brings balance to people's lives through his work with Away Find; and James T. Garner, who inspires people to do what inspires them; and Matthew Karsten, who is a professional vagabond and at the time of this writing is hitchhiking across the country.

I drank in every word of Nancy Duarte's powerhouse presentation on how story and vision for what could be catalyzes movements. I appreciate Darren Rowse's hilarious journey from shy guy to remarkable rabble-rouser, dreamer, and doer. He put words to my "multi-passionate disorder" and gave a much-needed reminder: "This [life] is not a rehearsal." Bob Moore spoke truth: "Success creates a responsibility!" We must pursue sustainability and permanence for both our businesses and our employees.

Those three presentations were only the beginning. Jia Jiang made me belly laugh for an hour with his picaresque of boldly seeking risk, rejection, and discomfort. Chris Jarvis made a compelling case for creativity as the new literacy and shared his vision for free education at creativelive.com. Don Miller talked about how our personalities form after we've cloaked ourselves in shame. Our failures and successes do not define us, and if we stop being careful, we may just meet the love of our lives and do the best work of our lives.*

In short, we have good reason to hope. 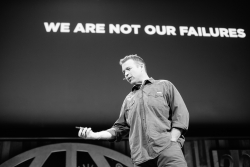 Thanks to Darren Rowse's keynote address and his workshop with Chris Garrett on making blogging profitable, I began writing a new guide to mobile app marketing. Nate, Jon, and I decided to turn Kicktastic into a platform for generosity and find a way to donate money to Charity:Water. We'll explain more on that in another post.

I laughed at stilt acrobatics and other shenanigans during the MarchFourth Marching Band show, discussed social media etiquette during a Portland Spirit cruise on the Willamette River, and ate Dirty Fries, the best I've ever had, at Lardo.

Yet, the memory that will abide with me is the look of bliss on Benedict's face after he flew.

Many of you have probably stumbled across Henry David Thoreau's poetic diagnosis of humankind's dilemma: "Most men lead lives of quiet desperation and go to the grave with the song still in them."

Benedict is not going to be one of them. Neither am I.

Chris Guillebeau, thank you for caring. Thank you for organizing a community at World Domination Summit 2013 where adventure and service happen, where a man usually confined to a wheelchair can become Superman. Thank you for singing your song and reminding us that we have our own to sing.

I've already purchased two tickets to World Domination Summit 2014. Will I see you there? You can add your name on the waiting list here.