Do Something Stupid - A Case for Leaping Before You Look

Lately I've been thinking about low ceilings and clownfish; about how competitive the App Store's Games category is and about ignoring that fact; about search funds and OMGPOP's Draw Something.

In short, I've been thinking about doing something stupid.

This past January I made a bonehead move. Before I even had a budget, I hired a programmer and began working on Mustache Bash, my first iPhone app.

You've probably heard that maxim about looking before you leap?

I should have. But I didn't.

With zero experience in software development, no knowledge of code, and naiveté for days, I had to depend on my developer to steer the process and educate me along the way. The potential negative outcomes weren't difficult to imagine:

Anyone who knew the rather precarious nature of my situation would probably have concluded that 1) my project was doomed to fail; and 2) I was an idiot.

Too many "What Ifs" threatened to derail development and leave me with my pockets picked and not a single digital mustache to show for my troubles. 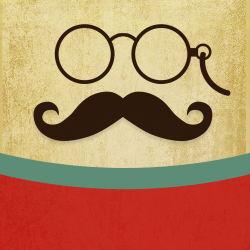 People in 100 countries around the world have downloaded Mustache Bash just shy of 500,000 times. The app has paid for itself, and continues to create a nice bump in my bank account each month. I have finished six other apps and have five more in various stages of development.

The moral of the story isn't the joys and uncertainties of app development, or the satisfaction that comes from hard work and persistence, or even the benefits of creating multiple streams of revenue in your business.

The moral of the story is this: Do something stupid.

The people who always do the sensible thing rarely change history. Samuel Pierpoint Langley had the education, credentials, and funding to put human beings in the air, yet Orville and Wilbur Wright were the first men to invent aircraft controls that made fixed-wing powered flight possible.

Neither had a college education. They didn't even receive high school diplomas! They funded their growing interest in flight with the revenues from their bicycle shop.

Their story is like so many hidden behind major accomplishments: ragamuffins, rabble-rousers, and righteous risk-takers make history. They were unqualified, but they wanted it more.

They did it for love, not for money or notoriety.

I'm not saying that leaping without looking is always the right thing to do, but I am saying that your lack of qualifications do not disqualify you from dreaming big. You can hem and haw and draw attention to the gaping holes in your resume, or you can go do something so stupidly audacious that it is doomed to fail unless it is doomed to succeed. We are not courageous because we possess a certain fervor that overrides the fear of failure.

We are courageous because we believe that failure is often the most direct route to success.

My leap involved creating an app that puts silly mustaches on pictures. Tell me about yours in the Comments section below.

Categories: Complete Elephant, Growing | Tags: leap before you look, do something stupid

Prev: Should Spouses Be Business Partners?
Next: How To Hire An Assistant